MPE — MIDI Polyphonic Expression: How It Will Impact You

If you’re a musician you likely know what MIDI is (Musical Instrument Digital Interface), but do you know what MPE is or how it will affect you and your music making? MPE, which stands for MIDI Polyphonic Expression, is a method of using MIDI that allows multidimensional controllers (MDCs), such as the ROLI Seaboard and the LinnStrument, to control multiple parameters (such as pitch bend, vibrato, timbre, volume) of every single note separately when using MPE-compatible software. Normally, channel-wide MIDI messages like pitch bend are applied to all notes on a single channel. MPE allows each note to have its own MIDI channel so that those parameters can operate independently per note.

While MIDI has come a long way since its introduction in 1983, the growth of alternate controllers has stretched the original spec. While alternate MIDI controllers, such as pad controllers for sticks and fingers, wind controllers, ribbons, joysticks, control surfaces, and apps for smart phones, have all been successfully integrated, newer technologies and keyboards have placed expanded demands on the original spec. One big issue has been the ability to have expressive gestures applied separately to individual notes, which newer multi-expressive keyboards require. These aspects are now addressed in the new MIDI MPE spec, allowing expanded creative opportunities for live and studio musicians, while maintaining compatibility with standard MIDI.

The following specifications are from the MIDI Manufacturers Association MPE Specification document:

Wherever possible, every sounding note is temporarily assigned its own MIDI Channel between its Note On and Note Off. This allows unique Control Change and Pitch Bend messages to be addressed to that particular note.

A Registered Parameter Number is used to establish the range of Channels used for sending or receiving notes. Two messages control the division of MIDI Channel space into sub-spaces called Zones, so that multi-timbral playing is still possible using only one physical MIDI interface.

When there are more active notes in a Zone than available Channels, two or more notes will have to share the same Channel. Under such circumstances, all notes will continue to sound, but will no longer be uniquely controllable.

Each Zone has a dedicated extra Channel, called the Master Channel, which conveys common information including Program Change messages, pedal data, and overall Pitch Bend. These messages apply across the entire Zone.

So what does this mean to the average MIDI musician? It means that you can use an alternative keyboard controller, such as the ROLI Seaboard, and apply separate pitch bend, vibrato, filter sweep, and volume swell to each finger in a real-time performance.

Here are some questions we anticipate you have.

Q: Will my current stable of MIDI products work with MIDI MPE?

Yes. It’s an enhancement of the MIDI spec, not a replacement, and is backward-compatible with existing hardware.

Q: How soon does this go into effect?

The MPE specification was adopted by the MIDI Manufacturers Association (MMA) in January 2018 and is being implemented now by manufacturers and software developers.

MPE will allow tracking and transmission of finger movements including left and right, forward and back, downward pressure, and more.

Q: Who was involved in developing the MPE spec?

Some of the biggest innovators in the industry were members of the MPE working group, including Apple, ROLI, Roger Linn Design, Moog Music, Bitwig, Yamaha, Keith McMillen Instruments, and more.

For more information about this excitingly expressive performance protocol, contact your Sweetwater Sales Engineer at (800) 222-4700. 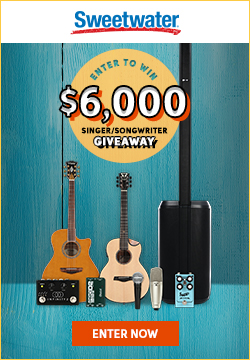 Songs That Stole the Show
4

Songs That Stole the Show

The Case for Matched Pair Microphones
5

The Case for Matched Pair Microphones

7 Great Reasons to Shop at Sweetwater
8

7 Great Reasons to Shop at Sweetwater